You've indicated that you are not attending this event.
You've successfully registered for this event.

Registration for this event has passed

Program will include screening of the film (1hr, 53min), followed by a short Q and A session with directors Harry Chuck and Josh Chuck, and possibly others (15min).

Please note: This film deals with intense subject matter and there are two instances of profanity in the film.

CHINATOWN RISING synopsis:
Against the backdrop of the Civil Rights Movement of the mid-1960s, a young San Francisco Chinatown resident armed with a 16mm camera and leftover film scraps from a local TV station, turned his lens onto his community. Totaling more than 20,000 feet of film (10 hours), Harry Chuck's exquisite unreleased footage has captured a divided community's struggles for self-determination. Chinatown Rising is a documentary film about the Asian-American Movement from the perspective of the young residents on the front lines of their historic neighborhood in transition. Through publicly challenging the conservative views of their elders, their demonstrations and protests of the 1960s-1980s rattled the once quiet streets during the communitys shift in power. Forty-five years later, in intimate interviews these activists recall their roles and experiences in response to the need for social change. 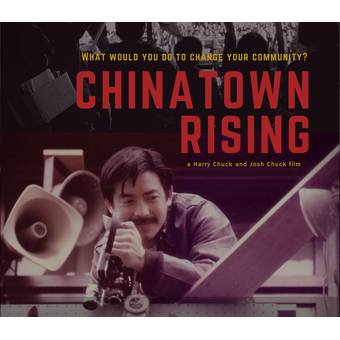